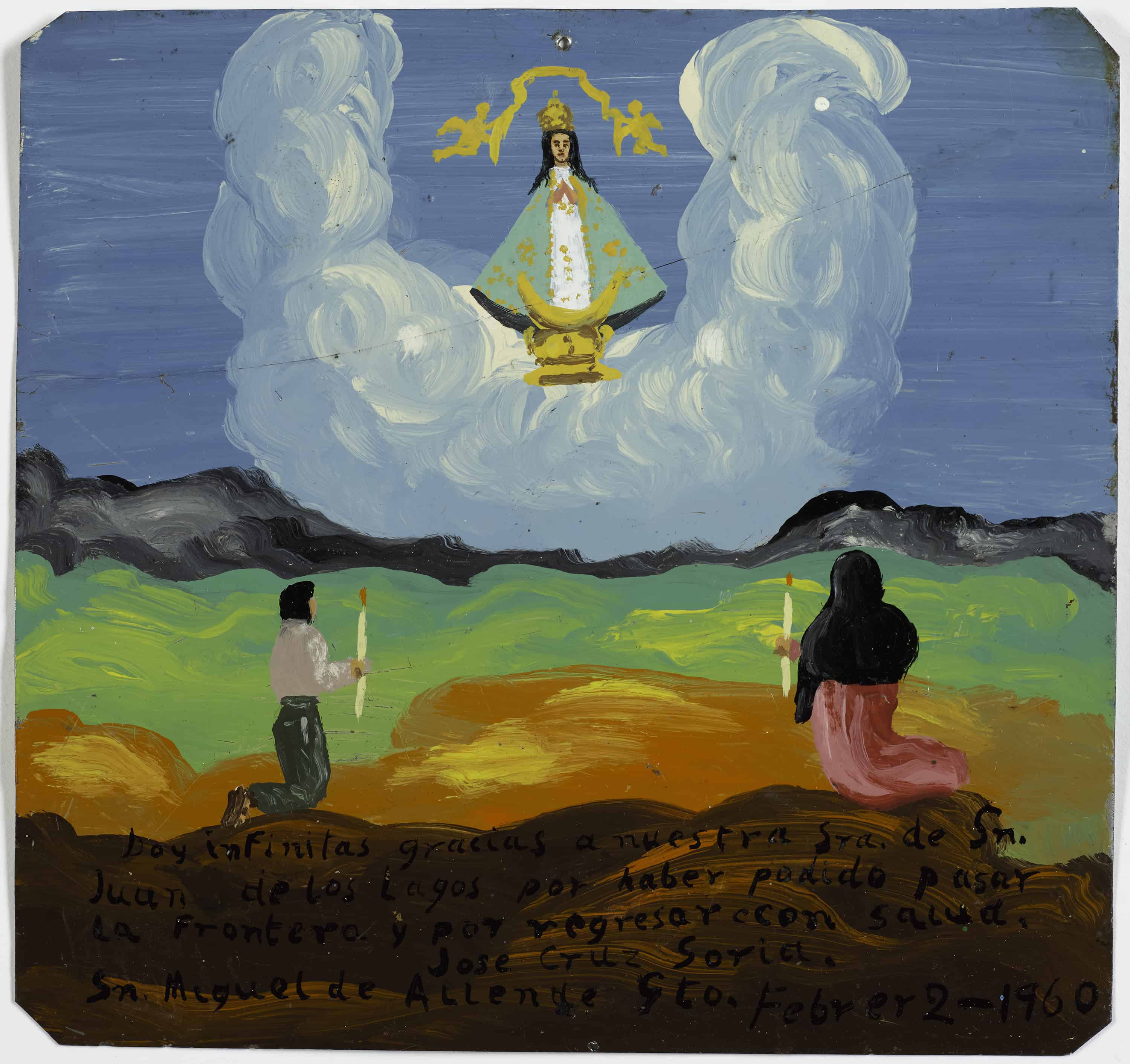 Miracles on the Border: Retablos of Mexican Migrants to the United States on view at the Princeton University Art Museum March 16-July 7, 2019

PRINCETON, N.J. – More than 50 Mexican retablos – folk paintings dedicated to Christ, the Virgin Mary or saints to commemorate a miraculous event – will be presented in a profound and timely exhibition this spring and summer. Vibrant and emotive, the small-scale paintings on metal span the entirety of the 20th century, serving as both historical documents and as eloquent personal expressions of suffering, insecurity and salvation, particularly in regard to the challenges of crossing the U.S.-Mexico border. The works in Miracles on the Border: Retablos of Mexican Migrants were offered by Mexican migrants at churches and pilgrimage sites throughout western Mexico and the United States.

On view at the Princeton University Art Museum from March 16 through July 7, 2019, Miracles on the Border will be presented in both English and Spanish. The exhibition is curated by Juliana Ochs Dweck, the Museum’s Andrew W. Mellon Curator of Academic Engagement.

“As personal testimonies of faith, hope and family separation, these delicately wrought images serve as powerful reminders about human strength and resilience in the face of acute challenges and hardship,” said James Steward, Nancy A. Nasher–David J. Haemisegger, Class of 1976, director.

The Museum’s bilingual exhibition and its accompanying programs are part of the Princeton Institute for International and Regional Studies (PIIRS) Mellon-funded Sawyer Seminar entitled “Global Migration: The Humanities and Social Sciences in Dialogue,” a timely and in-depth series examining the significant issues surrounding transnational migration.

The term retablo, from the Latin retro tabulum (behind the altar table), originally referred to painted depictions of saints or the Virgin that hung behind altars in Catholic churches in Europe and later in the Americas. In Mexico, reflecting traditions embedded in the culture by Spanish colonization, retablos came to denote the small paintings on tin placed as votive offerings in home altars, shrines or churches in gratitude for divine protection.

Usually produced by anonymous artists but signed and dated by the supplicant, retablos flourished in Mexico in the 19th century. In the wake of the Mexican Revolution (1910-20), the muralist Diego Rivera called retablos the “one true and present pictorial expression of the Mexican people” and promoted them as public manifestations of popular creativity.

Among the subjects addressed by the retablos on view are the difficulty in finding work, the danger of falling sick in a foreign land, and the joy and relief of returning home. Organized in chronological order, the works in the exhibition combine images and compelling personal narratives of gratitude, salvation and miraculous recovery.

“Though these expressions of gratitude for miracles small and large were commissioned by individual migrant laborers and reflect their personal stories, these insightful and moving images were in fact meant for public viewing,” said Sandra Bermann, Cotsen professor in the humanities, professor of comparative literature at Princeton, and faculty head of the Sawyer Seminar.

Two public programs with Durand and Massey have been planned to accompany the exhibition in partnership with the PIIRS Sawyer Seminar: Thursday, April 4, 2019, 5:30 p.m., McCosh Hall at Princeton University; and Saturday, April 6, 2019, 4 p.m., at the Princeton Public Library. The Saturday event features a lecture in Spanish as well as English.

In addition, an interdisciplinary faculty panel entitled “Mexican Votives across Time and Space” will take place on Tuesday, April 2, at 4:30 p.m. and will consider the role of retablos in Mexican art, religion and migration. On Saturday, May 4, from 10:30 a.m. to 4 p.m., the Museum will offer its spring family day with games, art making and performances focused on the retablos theme of gratitude.

Miracles on the Border: Retablos of Mexican Migrants to the United States has been made possible with support from the Frances E. and Elias Wolf, Class of 1920, Fund; and by the Princeton Institute for International and Regional Studies, the Program in Latin American Studies, and the Office of Religious Life, Princeton University.

About the Princeton University Art Museum

With a collecting history that extends back to 1755, the Princeton University Art Museum is one of the leading university art museums in the country, with collections that have grown to include over 100,000 works of art ranging from ancient to contemporary art and spanning the globe.

Committed to advancing Princeton’s teaching and research missions, the Art Museum also serves as a gateway to the University for visitors from around the world. Intimate in scale yet expansive in scope, the Museum offers a respite from the rush of daily life, a revitalizing experience of extraordinary works of art and an opportunity to delve deeply into the study of art and culture.

The Princeton University Art Museum is located at the heart of the Princeton campus, a short walk from the shops and restaurants of Nassau Street. Admission is free. Museum hours are Tuesday, Wednesday, Friday and Saturday 10 a.m. to 5 p.m.; Thursday 10 a.m. to 9 p.m.; and Sunday 12 p.m. to 5 p.m. The Museum is closed Mondays and major holidays.